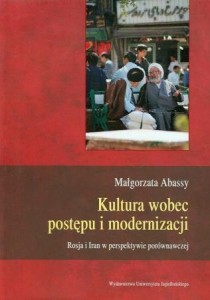 The book consist of four parts. After the introduction, chapter one is interrelated to the problems of culture and language, chapters two, three, and four discuss the experiences of modernization in Russia and Iran under the Romanov tsars and Pahlavi shahs. The last one is comparative perspective.

The Author, outstanding Polish researcher of Iranian and Russian culture and religion, formulated two hypothesis in her book. First: Iranian and Russian culture are typologically similar. Second: the response of these cultures to modernization was determined by internal mechanisms of development and struggle for protection of culture identity. M.Abassy helps us locate an appropriate place of the reaction of the cultures to the process of modernization.

Małgorzata Abassy understand culture as a “dynamic model” which “implies the question about the factor which makes the processes that occur within a culture more dynamic”. The author considers the opposition of culture-creating groups against non-culture-creating one. Also skillfully paints a language picture of the world in both cultures. Abassy assumed that Iranian and Russsian cultures were typologically similar at the moment of their “clash” with the idea of modernization, wherein this “clash” was recognized as a “challenge”.

In her comparative study, Małgorzata Abassy investigates also interesting – from geopolitical point of view – parallel of the monadic conceptions by Konstantin Leontyev, Nikolay Danilevsky, Al-e Ahmad, and Sheykh Shahid Fazlalalh Nuri. In Leontiev’s most remarkable book (The East, Russia, and Slavdom) he – like Nikolay Danilevsky before him – regarded the Eastern Orthodox Church and traditional Russian Byzantism and as a strong antidote against liberalization and westernization of the Russian society. M.Abassy interesting compares Russian vision of a struggle of the western and the eastern civilization with Iranian conception of moral development, strengthening of Islam and a renewal of Iranian native culture (Al-e Ahmad).

Abassy’s reflections on modernization from above offer valuable insights to the analysis of both the Russian and Iranian experiences by placing them in a broader context of cultural matters and historical events. Particularly interesting are excerpts concerning with the Russian and Iranian secular intelligentsia and its role in modernization of both countries. The author presents culture studies as a vibrant discipline and a powerful set of tools for advancing the study of world politics.

Overall, this is definitely an interesting read and compulsory for researchers specializing in Russian and Iranian Studies.

prof. Jakub Potulski The world that we have been witnessing is undergoing radical change, directly connected with the information revolution and transition from modern to the so-called postindustrial/postmodern society. The pace of these changes increases […]

Atom Sunil Singh Though political boundaries divide the environment into different sovereign nations, geographical relationship between them are still indispensable. The relations between nations are closely link with its geographical location. With the increment of […]