Though political boundaries divide the environment into different sovereign nations, geographical relationship between them are still indispensable. The relations between nations are closely link with its geographical location. With the increment of human needs and the limited natural resources, the geopolitics of resources is very significant.

The Gulf war or the Persian Gulf War on 2nd August 1990 to 28th February 1991 between Iraq and a coalition force from 34 nations are also one of the great impact on geopolitics of resources. With the enhancement for its necessity of resources are the significant of geopolitical environmentalism is also increased. The geographical environmentalism refers to the control of man by its geopolitical space. Still man depends on environment directly or indirectly whether it is politically divided or not. Political boundaries cannot alter the culture, which is an instinct to them.

Taking examples of similar cultural resources between Cambodia and Manipur, it shows its active role of geopolitical environmentalism. Cambodia, on the one hand, is a sovereign country located in the Southeast Asia, the southwestern part of the Indochina Peninsula, border with Thailand and Lao People Democratic Republic (Lao PDR) to the north and Vietnam to the south. Its coast borders the Gulf of Thailand. Manipur on the other is small state of India, which is situated at northeastern part of the country border with Myanmar. Even though they are located in different political boundaries, there are close bonds of similarities. The races of both the regions are mongoloid stocks. By political boundary seems to very far away between the two regions, however, geographically, culturally, racially, traditionally and historically are very close between the two regions.

For instance, "khudei" a sarong like attire worn by Meitei men in Manipur is also popularly attire for Khmer. Women wear "Phanek", a wraparound skirt for women in Manipur or a special kind of Sarong or "Sampot" in Cambodia and "haophi" or shawl is worn by both Khmer and Manipuri. Loktak Lake, the largest freshwater lake in Northeast India, is known for the only floating lake in the world and is the main source of water and livelihood for Manipur and a remarkable place of ancient history of Manipur. In the same way, Tonle Sap Lake, the largest freshwater lake in Southeast Asia, is famous for the only floating village in the world where all the basic needs of Cambodian available from ranging from fishes, foods etc. to schools, library etc. Looking on the diet, both people have similar foods, for instance "utongchak", rice cooked inside the hollow piece or stem of bamboo, fermented fishes etc since time immemorial. In Cambodia, bamboo is very popular for the any sort of construction as it is in Manipur. It is very interesting to know that bamboo train is one the most tourist attractions in Cambodia. Bamboo train by name itself shows, it is made by the bamboo, has a train service between Battambang and Phnom Penh. The Central Market of Phnom Penh is just like as the Kwairamban Bazar of Imphal, the capital city of Manipur where women sell eatable things to clothes and other day-to-day needs. Geographically both are more or less located in the tropic of cancer and more or less similar climatic condition. Cambodia is surrounded by highlands and hills and an oval shape valley in the middle of the country. Manipur is popularly known that it is surrounded by nine hills and one valley in the heart of Manipur. 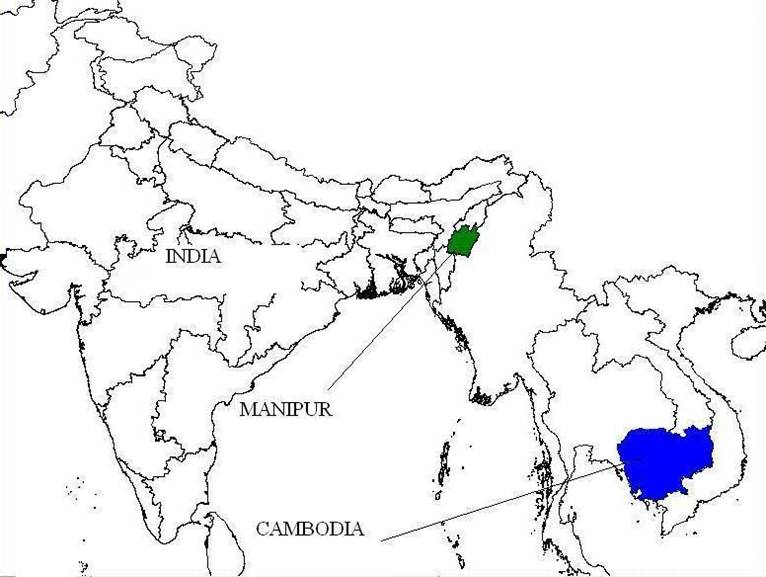 Such kind of geographical and environmental similarity begets similar culture. This geographical relationship between Cambodia and Manipur implies to geo-cultural relationships between them. The rare and threatened to extinct the Manipuri indigenous games like "mukna", "phibul thambi", "phibul thombi", "chaphu thugaibi", "marum konbi" are still one of the very popular indigenous games in Cambodia. Such Indigenous games of Cambodia can be seen during the Cambodian New Year Sport Festival as Manipuri plays games during Yaoshang[1] Sport Festival.

A game of Scarf Hiding, which is a game sitting in circle and one who try to keep a scarf secretly among one of the player. This game is played both region, which is known as "Leak Kanseng" (in Cambodia), "Phibul Thombi" or "Phibul Habi" (in Manipur). Another game is known as "Bay Khom" in Cambodia and "Marum Konbi" in Manipur is very popular game. In this game, two players play on the holes of the ground trying to get more number of the stones. Playing with blindfold to hit the pot known as Blind Hit is also an indigenous game and very popular game, which is known as "Vay Kaorm" in Cambodia and "Chaphu Thugaibi" in Manipur. The tug of war, "Teanh Preatt" in Khmer and "Thouri Chingba" in Manipuri is also a popular game in both the region during the Khmer new year in Cambodia and Yaoshang during March in Manipur. A game throwing scarf which is known as "Chol Chhung" in Khmer and "Phibul Thomba" in Manipur is popular game among the kids of Manipur and Cambodia. This is a sort of game throwing the scarf. One of the most indigenous games of Cambodia and Manipur is Khmer Wrestling and Mukna (Manipuri Wrestling) respectively. Their style of wrestling is very similar and they wear khudei or Kanseng while playing this wrestling.

The ancient Greeks had well-developed ideas the geopolitical environmentalism. In Encyclopedia of Human Geography Edited by Barney Warf highlights the relations between environment and behaviour of an individual globally and locally.The influence of the behavior becomes one day their culture of the community or family. The study seeks to trace the relationship between environment and their cultural resources assuming Indigenous games of Cambodia and Manipur as a case study. The close relations between Cambodia and Manipur become blur due to different political entity. This sort of retreating from the control of environment, which attempts to overtake the cultural bonds between themselves, is de-environmentalism. The behaviour of the individual adjusts and modifies the culture to adapt the new environment. However, by creating different political boundaries, the geopolitical environmentalism is still active with some modifications and still depends on environment.

[1] Yaoshang is a modified form of holi festival of Hindu festive  held for five days during the month of March.