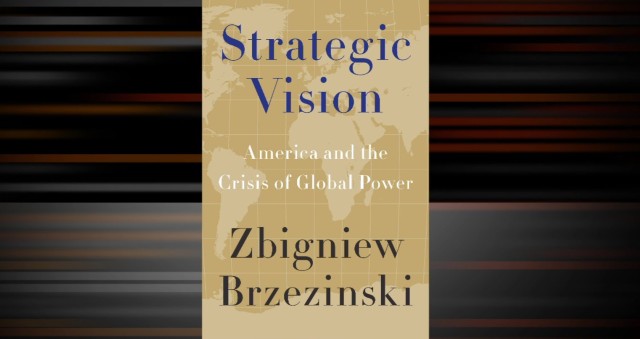 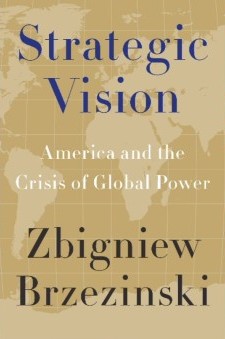 Zbigniew Brzezinski, an American scholar of Polish origin and former National Security Advisor for President Jimmy Carter, is certainly a prominent figure. Despite his age (Mr. Brzezinski is 86), he still remains one of the most thoughtful and farsighted representatives of the American political establishment. His views on international events and predictions of future developments have always been worthy of careful attention, and now, being semi-retired he can be even more outspoken and critical than before. His most recent monograph, Strategic Vision: America and the Crisis of Global Power (Basic Books, 2012) is certainly subjective but still quite informative, and perhaps, an even revealing analysis of the present world and its prospects in the 21st century. As in any other work on this subject, there are parts which one could approve and greatly appreciate and some other which might be perceived in a more critical way.

On the positive side:

1) Professor Brzezinski is one of the very few American scholars to recognize the role and importance of geopolitical factors especially with regard to American growth and power. In principle, he is mostly a realistic thinker and observer.

2) Although a supporter of American imperialism and its global domination for all his life, he is still able to notice the ongoing changes and wants his country to adjust to what he calls “the post imperial era”. He recognizes that although America’s decline would generate global insecurity and many other problems, “the strategic complexities of the world in the twenty-first century resulting from the rise of a politically self-assertive global population and from dispersal of global power- make such supremacy unattainable” (pp.119-120).

3) He recognizes that while the growth of China’s economic and political power poses a potential future challenge to America’s current global pre-eminence, “China’s influential and rising role in world affairs is a reality to which American have to adjust instead of either demonising it or engaging in thinly concealed wishful thinking about its failure” (p. 169).

4) He is one of the very few figures in the American establishment to call for a serious US commitment to peace in the Middle East, and the proposition was, as he writes “anathema to Bush and his advisers” (p.70). In his view, “the Iraqi war was unnecessary and should have been avoided” (p.69), while a new war against Iran would bring disastrous consequences: “the probability of a direct conflict with Iran and the probability that US failure to promote an equitable Israeli Palestinian peace accord will generate more intense popular hostility against America in the politically awakening Middle East”. (p. 71).

5) He perceives the ongoing shift of global power from the West to the East and the growing role and importance of Asian nations, while warning Americans against any further direct military involvement in this continent, with the only exceptions of those stemming from previous legal obligations to Japan and South Korea. Overall, his analysis of the situation in Asia is remarkably well informed and balanced. Moreover, he indicates that “the Indian political system has yet to prove that it can function as ‘the world’s largest democracy’” (p. 162). Partly because of that, he seems to be against an American-Indian alliance which has been suggested by others. According to him the US should be mainly a balancer and conciliator between the major powers of the East, and its role should perhaps be similar to the one of Britain in European history before World War I.

Much more controversial and causing doubts on my part is the author’s analysis of what he calls a vaguely defined West uniting the North America and Europe (the EU) to which Mr. Brzezinski suggests adding Turkey and Russia. Although he acknowledges a number of American domestic problems and the last two decades’ foreign policy blunders, he still stresses that America is “peerless” (p. 21) in every significant and tangible dimension of traditional power – military, technological, economic and financial – and that the soft power of the American dream, though weaker than before, is still unsurpassed.

According to him after World War II, vulnerable to Soviet power, Western Europe became almost formally an American protectorate and informally its economic financial dependency. (p. 12). Ongoing economic difficulties which were magnified after 2007 “made the notion of Europe as a political and military heavyweight increasingly illusionary” and “Europe once the center of the West became an extension of a West whose defining player is America” (p. 126). As a consequence, there is thus no real difference between “the West” as such and the American Empire. The author considers the latter to be a real guarantor of global peace and security, especially for the countries which are threatened by local regional powers and which the US can use as its pawns in a great political game. Professor Brzezinski wants to renew and enlarge this kind of West by adding to its control and including in its fold the properly reorganized and subdued Turkey and Russia. He believes that only after this enlargement will the West be strong enough to be able to balance successfully China and other Asian powers. According to him Turkey is already on the right path but present day Russia represents a problem.

Brzezinski, who is quite conciliatory regarding China and wants to avoid conflict with Iran, remains still very hostile to Putin’s Russia, which he considers nemesis of the American-led West, a source of harm and failures and possible future threats. At times, the author’s opinions on Russia often sound contradictory.

On the one hand, he describes it as a total socio-political and economic failure and a nation dying out: “Russia has not displayed diplomatic fitness of great Britain or the commercial acumen of the democratically-appealing America, or the patient self-control of historically self –confident China” (p. 139). At present, “widespread global awareness of Russia’s social liabilities… discredits its international aspirations” and “its grave demographic crisis – a negative population growth is a testimonial to social failures”. At the same time, “the growing uncertainties regarding rising Islamists unrest along its new Southern borders and Russia’s barely hidden anxieties regarding its increasingly powerful and densely populated Chinese neighbour, situated next to Russia’s empty East, collide with Moscow’s great political hubris” (p. 140).

On the other hand, this presumably weak and collapsing nation is seen by Brzezinski as a source of major threat to American (Western) security and interests in Europe, Asia and even to some other places such as the Arctic. As he argues, “the cardinal principle of a strategically prudent policy has to be that only a Europe linked to America can confidently reach eastward to embrace Russia in a historically binding relationship” (p. 149). He seems to be deeply concerned about some closer German–Russian or even Italian-Russian relations as a possible threat to Western unity, while in Asia he is against a US-Indian alliance also because “such an alliance would be a gratis favor to Russia without any Russian favor in return” (p. 165).

In the future, post-Putin Russia needs to be submitted to Western control and supervision in the same way as defeated Germany and Japan were after World War II. In the author’s view, “a Russia left to its own devices and not deliberately drown into larger democratically transformative framework, could again become a source of tension and occasionally even a security threat to some of its neighbours”, otherwise, “Russia remains unable to define for itself stable role that strikes a realistic balance between its ambitions and its actual potential” (pp. 144-145).

Present-day Russia cannot be accepted to either NATO or the EU and only after thorough transformation compatible with the EU and NATO standards and acceptance of the Western model and ideology it could be included into the Western block, with however no say in NATO’s decision processes. Professor Brzezinski seems to believe that this is the only possible way to go for Russia which has no other chances to develop or even survive.

In my opinion, the author’s arguments on the “Russian problem” are the weakest and least convincing in the context of an otherwise well researched and thoughtful monograph. Even his analysis of American-European relations is far from satisfactory. The American hegemony of Western Europe has been based on the fact that, as he somewhere else admitted, “We [Americans] dictated” (Zbigniew Brzezinski and Brent Scowcroft, America and the World, p. 211).

The American protective umbrella over post-world war Western Europe was so easily accepted not so much because of fears of the rather unlikely Soviet military invasion, but because of the European middle class fears of social revolution and a quest for socialist transformations, which at that time had great support among the majority of populations. The fragile domestic social situation in Western Europe was the likely reason for the establishment of a social welfare state which the author apparently dislikes and considers being financially unsustainable. Even now the political traditions and interests of major European nations and America are different or even contradictory.

Russia (the USSR) has never been militarily defeated nor occupied like Japan and Germany. Though greatly weakened after the USSR’s collapse and the very painful transition to capitalism, Moscow still wants to remain an independent power center. More importantly, it represents a set of political traditions and a culture different from the Western ones. The solutions for the Russian problem suggested by the author would need to be imposed by military force or various other coercive forms. However, both the present day Russian political leaders and the majority of the people there would probably resist them. Also, it is by no means certain that the US has enough means to impose its will on Eurasia. At the moment, the Russian Federation is not a superpower and cannot represent a real security threat to the US, or to its major allies. Nevertheless, it remains a very large country with a meaningful defense potential.

In addition, its present socio-economic and even demographic situation are better than professor Brzezinski’s wants to believe, and as himself is ready to admit with regard to China, the Western (American) model is by no means the only possible way of development and survival.

Professor Brzezinski’s latest book represents a summary of rich knowledge of the world and contains good insights and ideas. At the same time, it might sometimes be seen as proof that inveterate clichés and prejudices cannot be easily avoided even by the most prominent intellectuals. Russia might be and probably is even willing to adopt a number of Western-originated rules and institutions. Its leaders are constantly repeating that the country wants to be a partner of the US and other Western powers. However, especially after the painful experiences of Yeltsin’s period, it does not want to become a US or EU satellite. All Western efforts to achieve this would probably be too costly and their results uncertain or even disastrous.

Not only Russia but also Western powers should be willing and able to strike a realistic balance between their ambitions and their actual potential. In order to do that, they should not create artificial enemies or to look for unnecessary conflicts. Only by doing that can the US, which might still remain the greatest power in human history, play a positive role as balancer in the multipolar and pluralist world including China, Russia, India and a number of other independent power centers which, in spite of their different history and political interests, do not need to be violently hostile or to fight each other.

Author is non-resident fellow of European Geopolitical Forum on the History of Trans-Atlantic Security.