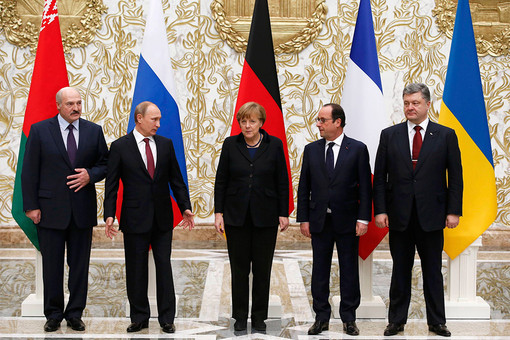 The optimistic predictions that "the Minsk-2” accords will be successful, will bring long term peace and quiet to the war-torn southeast of Ukraine” and perhaps even, "will put the nail in the coffin of NATO expansion” were based on two rational, but not including some other factors, premises:

1. The increased activism of the anti-war movement in the US which includes the leading representatives of the Realist School of International Relations who want to reclaim their presence at the foreign policy Establishment table.

2. The growing opposition in Europe against the more aggressive Western steps and further aggravation of the relations with Moscow. In contrast to the Americans the Europeans, both  leaders and the majority of the common people are not protected from the potential threats of war by the two oceans, and as on February 13, 2015 the popular German weekly Der Spiegel noted: "Nuclear Specter Returns: Threat of War is Higher than in the Cold War.”

Facing the criticism from a substantial part of the American intellectual and social elite and the misgivings of the Europeans, the War Party on Capitol Hill would be allegedly presumed to get more moderate and at least give a chance to the Minsk-2 agreement and the end of bloodshed in Donbas.

I wish it were true that peace is around the corner, but unfortunately I have doubts about it. Although both of the above mentioned premises for the better future of Ukraine and peace in Europe are of real importance, the argument based on them did not take into account the full picture of the existing situation. There are some other factors, , both Ukrainian and international which need to also be taken into consideration.

In his following comments Dr. Armstrong, who seems to be sceptical of the success of the Minsk-2 agreement, indicates its two local Ukrainian flows: not solving the "Debaltsovo Cauldron” problem and the fact that the radical Ukrainian nationalists "volunteer battalions,” which are neither under Poroshenko nor perhaps even under Yatseniuk’s control, "are not interested in compromise; to them a ceasefire is betrayal.”

I think that the Devatsevo Cauldron closed problem has been by now or at least alleviated and the well-armed and often fanatical Ukrainian radical nationalists would not be able to survive for long without foreign support. However, Dr. Also Armstrong mentioned another more important factor, "any meddling from Washington.” I believe that he is right and that this is the most difficult issue to solve. Although the anti-war movement in the US includes many knowledgeable and respected people, they now cannot control  the political power (Beltway) and mass media, and I am not sure that they would be able to influence the major political decisions. It seems to me that the whole Ukrainian problem has been intentionally instigated in order to weaken the Russian Federation and to overthrow Putin’s regime.

This is by no means a new project. In his 1997 book Zbigniew Brzezinski wrote about the enormous strategic importance of Ukraine for the future of Russia[1] and in 2004 the American intelligence expert Peter Zeihan has indicated that, „without Ukraine, Russia’s political, economic and military survivability are called into question.”[2] According to him, „It would not take war to greatly damage Russian interests; simply a change in Ukraine’s geopolitical orientation. A Westernized Ukraine would not be so much be a dagger poised at the heart as it would be a jackhammer in constant operation.”[3]

However, although many Americans have always seen as in "in the best Washington’s interest is to slowly grind Russia into dust”[4] the attempts for Ukraine’s takeover needed to be postponed at that time. In 2004 the „Orange” Revolution did not bring the expected outcomes and Washington, being involved in Iraq, needed some „selective cooperation with Moscow concerning Iran and some other major strategic issues.”[5]

However, even before the Russian-Georgian War in 2008 the situation started to become tense again. As James Garden indicates, "the years 2008-2013 might, without exaggeration, be seen some years down the line as the West’s ‘March on Moscow.’”[6] On April 3, 2008 the NATO summit in Bucharest welcomed Ukraine’s and Georgia’s Euro-Atlantic aspirations, and stated that, „those countries will become members of NATO.”[7] Because of the opposition of France and Germany and the outbreak of the Russian-Georgian War in August of the same year, the implementation became impossible at that time, but anti-Russian information warfare and political campaigning were continued uninterrupted, including the often surprising and baseless attacks on the Olympic Games in Sochi in the fall of 2013, where no serious American political interests could have been involved.

The present Ukraine Crisis and its international consequences (the Ukraine’s crisis) are at their last and potentially most dangerous stages. At least in my view, in order to find their solution it is not enough to look to this or that domestic Ukrainian accords. What is no less needed is to search for a new Moscow-Washington understanding on the future of the post-Soviet regionwhich would be acceptable to both sides. Without that, no Ukrainian settlement will prove to be successful, or in the best case it will be short lived. During the last Minsk negotiations, and even before, it became obvious that only the Americans would be able to persuade Kiev’s government to accept a viable compromise with the eastern Ukraine rebels. The Europeans have now neither the power nor the will to do that and, disregarding their own misgivings in all political decisions have to follow their big American brother. The kinetics of the Ukraine conflict will ultimately depend on the future of constitutional reform, which without American support has no chance to be implemented.

What is no less important for Moscow, in spite of all diplomatic efforts, and the Minsk-2 agreement, the Russian government cannot "expect the lifting of EU sanctions for a long time, and even then it is hard to expect business as before.”[8] In fact, the US Secretary of State, John Kerry, has recently suggested new sanctions to be imposed and according to Dmitri Trenin, „the gulf between Russian and the European Union is wide, deep and growing.”[9] Few people can deny that Western-Russian relations have deteriorated to an  unseen for many years dangerous level.

At the World Russia Forum in June 2014 Dr. Leonid Gozman suggested as an only possible way out of the crisis to call an Obama-Putin summit. Does it still seem possible to think about such an option now?

[8] Dmitri Trenin, "Ukraine points towards the start of a tumultuous new era in world politics,” The Guardian, February 15, 2015.